On February 24th I attended a foraging walk with Cindy Moonrose near Whites Creek, Tennessee.  There were about eleven of us stomping through the cold woods stopping occasionally to look at what was blooming.  As we stood looking at some dead nettle, I asked Cindy what the skeletal winter dried plants were that were everywhere.  They were spindly antenna shaped with what appeared to be remnants of pods along the limbs. 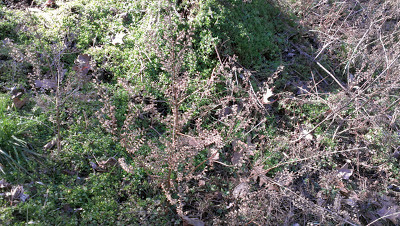 Cindy said that this was Perilla which is a cousin of mint and an excellent fire starter due to its high concentration of oil.  It can make animals sick if they eat too much of it.  It also had the ability to remove warts if leaves are applied for 15 minutes a day for 2-6 days according to her research.  I picked a bit then just to smell and it had a pleasant strong aroma to it.  We moved on.

When I got home of course I began to research all the plants we encountered.  Perilla was actually an afterthought as it was not a focus of our walk.  I was utterly surprised when I discovered that Perilla is actually Shiso, a native of India and an herb commonly used in Japanese and to a lesser degree Chinese and Korean cuisines.  Pepsi even made a Perilla flavored soda for that part of the world.  Since this has become a pervasive weed-like plant in this area, it may or may not have lost the Shiso flavor.  There is no way to tell just by the outward appearance of the plant as flavor depends on genetic factors, climate and soil.  However, just the smell of the dried version has me convinced that the actual plant would have a wonderful flavor and worth more exploration when it is in full bloom.  Shoots will begin to appear in March and flower by the end of summer.  Perilla is easy to grow and will reach heights of two to three feet.  Varieties of this plant can be either green or purple and can cross pollinate.  There are even versions that can be frilly, and ruffled-leaved. While it is not a perennial, it does quite successfully reseed itself as seen in a recent trip to the woods.  Much like basil, it can grow in partial shade or sun.  Here is a version of the plant while in bloom. 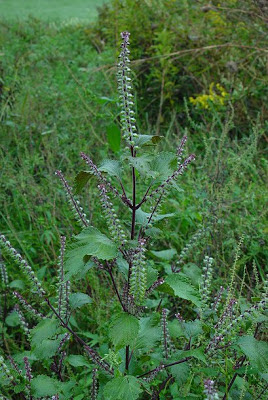 The leaves of the Perilla plant are high in Vitamins A and C.  They are rich in fiber and riboflavin.  Minerals include calcium, iron and potassium.   The plant has been used as an anti-inflammatory and it has been known to have preservative effects on other food due to the presence of terpenes such as perilla alcohol.  In Japan, the oxime of perillaldehyde (perillartin) is used as an artificial sweetener since it is about 2,000 times sweeter than sucrose.  While the seed oil is edible and contains a high concentration of alpha-linolenic acid, a kind of omega-3 fatty acid, it also contains a chemical that is a potential lung toxin, thus should not be used as a cooking oil. The leaves, on the other hand, have been used in culinary creations for hundreds, if not thousands, of years.  The flavor is best when the leaves are used fresh. 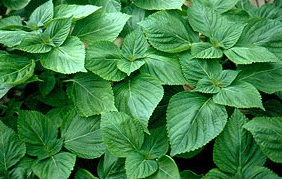 After cutting up ingredients, toss in medium bowl. Chill and serve.

Cooked pasta according to package directions. Meanwhile, in a food processor, combine the shiso, cheese, salt, oil and lemon. Puree until smooth.

Toss with hot linguine and serve topped with walnuts.

Cook pasta according to package directions. Meanwhile, in a large saucepan, saute garlic in butter. Remove from the heat. Drain pasta; add to garlic butter. Stir in the Parmesan cheese, shiso, salt and a generous squeeze of fresh lemon juice; toss to coat.