If you have researched much on foraging, you will frequently come across writers waxing poetically about the benefits and their love of the mild peppery taste of watercress.  It has been on my top five plants to find for forever.  I would always glance at any body of water looking for the telltale signs of green growth but never finding it...until now!  Recently I visited a local park that has an old farmhouse on the property which is being renovated.  Behind this totally cool house are various out buildings including an old log house which is falling in and a spring house in fairly good shape.  I suspect that the location of the house and log cabin was directly related to the spring available.  The area is partially fenced in so wild animals or stray cows would find it very difficult to access. 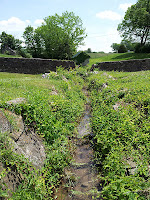 The spring flows out of the spring house and down a canal built up on either side by stones.  This leads to the pond not far away where there are fish and you can often find people fishing.  The water from the spring is crystal clear.  Honestly, I had never seen watercress up close.  I've probably eaten it at restaurants but did not know what it was.  I've looked through upscale groceries for the rare offering but to no avail.  It does not last long after cutting so it is not mass produced.  There are also many versions of cress so it was necessary to research and find the one at which I was looking. 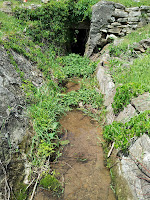 As it turns out, what I found was Rorippa nasturtium-aquaticum (Nasturtium officinale) from the Brassicaceae (mustard and cabbage) family. This family also includes broccoli, cabbage, brussels sprouts, cauliflower, kale, mustard greens, collard greens, bok choy and turnips. Watercress is a fast-growing, aquatic or semi-aquatic, perennial plant originally from Europe and Asia, and one of the oldest known leaf vegetables eaten by humans. It is a creeping, floating, hollow stemmed plant with leaf branches that contain three to five oval shaped small leaves.  In the spring it has small clusters of white four-petaled flowers. 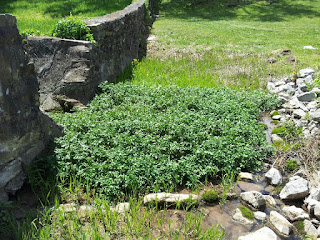 I picked a few specimens to take home with me and put in a glass of water.  Within a day it had rooted, however, it prefers flowing water and will eventually wilt and die in a cup.  One method to keeping it fresh longer than a few days is to put it in water when you get it home.  I picked more and put in a bag into the refrigerator for a few days.   When I took it out it was still fairly firm but starting to lose its perk.  I plucked the leaves from the plants that I wanted to use and just as an experiment, I put the stems in water.  Within a couple of days, these too had rooted.  It is truly an amazing, resilient plant.  It particularly likes springs and will survive all winter long in them.  A spring is usually cooler in the summer and warmer than the environment in the winter.

What's so great about watercress?  It is a super food! It is packed with vitamins and minerals and actually tastes good. It has more calcium than milk, more vitamin C than oranges, and more iron than spinach. It was once known as scurvy grass as it prevented scurvy in sailors.  It has detoxifying qualities, lowers cholesterol and has been attributed in recent research to help prevent and fight cancer particularly of the throat, lungs (Hecht SS, Chung FL, Richie JP, et al., 1995) and breast (University of Southampton, 2010). Eating it daily can reduce the DNA damage to white blood cells which is a trigger in the creation of cancer (University of Ulster, 2007).

When there is good, there is bad... You have to be careful where you get it.  Being that it grows in water, it can take on the pollution in the water. Also, there is a chance that if watercress is downstream from a farm with animals, particularly sheep and cattle, it may contain the immature parasite larvae of Fasciola Hepatica, or the "common liver fluke."  It is a parasite that can cause liver damage to its hosts of which humans can number. You can also acquire this from raw or undercooked freshwater fish. According to the CDC, Fasciola infection is both treatable and preventable. This is why it is important to choose a stream without pollution and not near cattle or sheep.  Liver fluke infections in humans are uncommon in the United States, but they do occur, particularly among people who have traveled to parts of the world where these parasites are frequently found.

If your fears outweigh the potential benefits of watercress, fear not, there are ways to secure your plants.  You can wash your watercress with water and a 6% vinegar or potassium permanganate for 5-10 minutes which kills the potential problem.  Also, watercress, unlike common grass, is dicotyledon meaning that it grows from the tips and not the base.  Thus, if you pick your watercress above the waterline, you should be safe as the larvae can not climb.  Finally, cooking will kill it.  In fact, according to the University of Florida, the larvae on vegetation are quickly killed by summer's heat.  Use your found watercress in cooked dishes if you are unsure.

Add the bread ingredients into your bread machine in the recommended order by the manufacturer.  Set to the dough cycle.   You can also mix and knead the ingredients manually if you prefer.

Once the cycle has ended, lightly grease a large cake pan or a pizza pan.  Remove the dough from the bread machine and roll out to fit your pan.  Cover with plastic wrap and allow to rise for 30 minutes.

Preheat oven to 400 degrees F.  When the dough has finished rising, using your fingertips, poke the dough to make deep indentions on the surface.  Drizzle with olive oil.  Sprinkle with sage, watercress, wild garlic and sea salt.

Bake for 20 to 25 minutes until golden. Serve hot.  Here is a photo of the final result:

Bring a large pot of salted water to a boil. Add cubed potatoes and boil for about 15 minutes until tender but still firm. Drain and mash. Mix in 1 tablespoon butter, half of the chopped watercress, and half of the shredded cheese.  Season with salt and pepper to taste and set aside.

Meanwhile, in a large frying pan, add one tablespoon of butter, chopped onion, chopped carrots and chopped celery.  Fry mixture for 10 minutes until tender, remove from pan and set aside.

In same pan, add the ground beef and cook until browned.  Drain.  Stir in flour and cook for an additional minute.  Add vegetable mixture, the Worcestershire sauce, beef broth, ketchup and thyme. Stir and simmer for 10 to 15 minutes until reduced then stir in the other half of the chopped watercress.

In a large casserole dish, layer the ground beef mixture.  Add the layer of mashed potatoes.  Top with the remaining cheese.

Bake for 20 minutes, or until golden brown.

Scrub the potatoes, and prick several time with the tines of a fork. Place on a plate.

Cut in half lengthwise and scoop out flesh leaving some to preserve the potato shape.

Mash the scooped potatoes and mix with the remaining ingredients.

Fill back into skins and bake 20 minutes.

In large saucepan melt butter over medium heat. Add onion and fry until soft and translucent, about 5 minutes with occasional stirring.  Add cauliflower, chicken stock, and milk. Bring to a boil. Cover and reduce heat. Simmer until cauliflower is very tender when pierced (about 15 minutes). Add watercress and cook for one minute more. Remove from heat.

Working in batches, add soup to food processor and purée.  Return soup to saucepan to keep warm and season to taste with salt and pepper.

Notes: While the content of this blog has been tried/tested and the research diligently presented, I am not responsible for your use of it. Always try a little of the food first to test for allergies. Please do your own research. Discuss with your doctor before you use any herbal medications.