Several years ago I would have tossed the leftover holiday turkey bones without a second thought. That was before I realized their true value! Making and canning broth not only saves you money but you get to control the flavor and nutrition.  I have discovered that it far surpasses the bland and weak store bought varieties.

Throughout November and December there are numerous opportunities to purchase cheap turkeys. So by the time Christmas is over, I have accumulated four carcasses in my freezer (sounds a little scary put like that).  I have also been saving end cuts of onions, leeks, garlic, peppers, etc. in a little freezer bag just for broth making purposes. Oh, and you remember all those great Halloween pumpkins?  After the holiday, I diced and canned most of them and chopped a few up to freeze. These make great additions.  I also recently picked some wild mustard which I included. Additionally, I added some dehydrated chives and Kudzu leaves.

It is a very simple process. Place the bones in your pot.  Add vegetables on hand (like carrots, onions, garlic, celery, etc). Add several tablespoons of vinegar to help release the calcium from the bones. I prefer balsamic vinegar for the flavor. Cover with water.  Bring to a boil and then reduce to simmer. Cook for at least four hours.  Stir occasionally.  Add salt to taste.


Prepare your pressure canner and ready your jars and lids.  When ready to can, drain to remove solids. Some people prefer to refrigerate their broth over night so that they can skim any extra fat which gels on top and then reheat to can. I will skim whatever fat I see after cooking, but I do not worry so much about removing all fat.  Pour into your jars and wipe rim of jar with paper towel which you wet with water and vinegar to help remove oils. Place lids on finger tight.

If you are making a large amount of broth at once like what I am doing, you may want to use some of it to make some soup with your holiday leftovers.  I recently purchased 20 lbs of potatoes for $4 which I used to make ham and potato soup with my leftover holiday smoked ham.  Here's a little secret about canning potatoes.  You do not need to precook them to can.  When you peel and dice them, drop them into a bowl of water with lemon juice and salt.  Soak.  Drain and refill at least two times.  This helps remove the starch so you do not end up with cloudy potatoes.  It is also something to do while making the broth.  I prefer this method because precooking and then pressure cooking make them too mushy in my opinion. 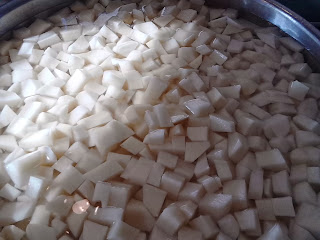 In a quart jar, layer potatoes until half full.  Add several tablespoons of diced ham. Fill remainder of jar with carrots and squash.  Pour in hot broth and wipe rim of jar with paper towel which you wet with water and vinegar to help remove oils. Place lids on finger tight.

To prepare, you can eat as is or add cream or cream of whatever soup to give it a creamier texture.

It is amazing the number of wild edible plants that are still thriving in December! Winters in Middle Tennessee are generally mild until January and February.  We have had several frosts already but some plants are still going strong.  In my garden, I can still pick Kale, Egyptian Onion, Sorrel, and Mustard greens, though only the Kale is still looking at its peak.  I grew Sorrel and Mustard (love both) this year just so that I could recognize it in nature.  However, I have found that the domesticated version often looks different than in the wild but frequently tastes the same. 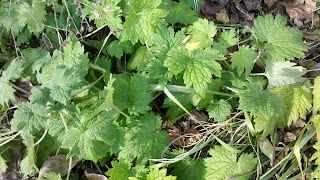 Motherwort (Leonurus cardiaca) is a herbaceous perennial plant in the mint family, Lamiaceae.  As with all plants in the mint family, this plant has a square stem.  Just fyi, if the world as we know it ends and you are currently on Prozac or some other mood altering drug, this is a plant that you need to know about.  It is a mild relaxing agent, improves mental outlook and reduces anxiety without putting you to sleep. It is also good for your heart.  You can dry the leaves and use in tea or make a tincture with them. The leaves are not that tasty so if you make a tea, add other leaves, like mint, to improve the taste. 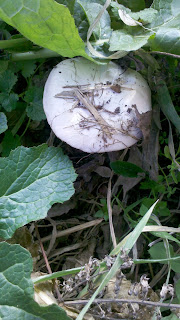 I am no expert on mushrooms and therefore I do not pick or eat wild ones.  However, they do exist at this time of year.  So if you are an expert, you can find them at Harlinsdale.  If you know what this one is (just out of curiosity), please leave a comment letting me know. This one was found surrounded by wild mustard.  There was also another type of wild mushroom attached to what appeared to be a dead or dying tree growing next to the bridge over the stream. 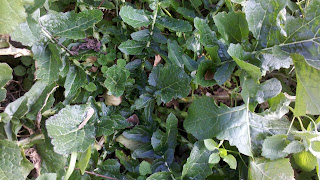 Thriving young plant of wild mustard. You would never know it was December by looking at this plant.  Notice the deeply lobed lower leaves with large terminal segment and smaller lateral lobes.  The mustard I grow in my garden is frilly while this one is not.  However, the taste is the same, very distinct, almost like horseradish.  You can eat it just like you can eat the mustard purchased in the grocery store (Food Saver carries it).  It is especially good sauteed. You can also dehydrate it and add it to soup and stews.  Once cooked, the strong flavor is tempered.


Burdock is a plant that grows for two years and then dies.  See the spiky parts above?  That is the skeleton of the second year plant and also the inspiration for Velcro.  Really.  The big leaf beneath is a first year plant and that is what you want.  Right now is the best time to collect the roots on the first year plant because when it grows next year the roots will be used up to grow the flower heads.  Just fyi, you can also buy Burdock root at Whole Foods just down the street, though it is a bit pricey!

Blackberry leaves.  While blackberry season is over, you can still find the leaves on some of the plants.  These can be used to make a great tea or as remedy for digestion problems.  They also contain vitamin C. 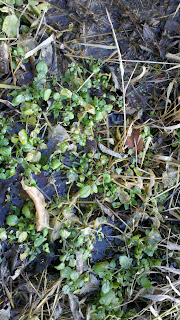 One of my favorites, Watercress!  While not in the prime of its growth, it can still be found growing strong.  Watercress actually prefers the cold and now that all the other plants have died away, you can actually see it again in the stream. There are two different styles of watercress that grow in Franklin.  One is the traditional rounded leaf variety that you find at the Buckingham stream in Franklin and can also be purchased at Whole Foods (grown in California).  The other variety has more pointed leaves (which can be found here).  Both taste the same.


Clover, in the pea family.  You can find this everywhere, and it is edible.  The flowers are tasty but not currently in season (red is better than white).  The leaves are not so yummy but if you are starving, they can become an acquired taste. They are also packed with a powerhouse of vitamins and protein.  Read Green Deane's post for more information. Some people can be allergic to this plant so it would be best if you figured that out before eating in abundance.

Notes: While the content of this blog has been tried/tested and the research diligently presented, I am not responsible for your use of it. Always try a little of the food first to test for allergies. Please do your own research. Discuss with your doctor before you use any herbal medications.
Posted by Dr. Mom at 2:16 PM No comments: