A Citrus Tree That Will Grow in Tennessee!

I would not have believed it if I had not seen it with my own eyes.  Tennessee actually gets a little snow during the winter.  Granted it is rare and warrants an immediate trip to the grocery store for provisions, but it does happen!  I grew up here and until Friday had never seen a citrus tree growing and surviving outside.  I was at Cindy Moonrose's home, a local foraging teacher, snooping around her garden.  I saw a bush/tree like plant with many thorns and asked her what it was.  She said it is one of the only citrus plants that will grow in our area.  It was called the "Flying Dragon."  Her plant was several years old and had survived outside without any problems.

Flying Dragon information according to Wikipedia:

"Trifoliate Orange, Poncirus trifoliata (syn. Citrus trifoliata), is a member of the family Rutaceae, closely related to Citrus, and sometimes included in that genus, being sufficiently closely related to allow it to be used as a rootstock for Citrus. It differs from Citrus in having deciduous, compound leaves, and pubescent (downy) fruit.

It is native to northern China and Korea, and is also known as the Chinese Bitter Orange. The plant is fairly hardy (USDA zone 5) and will tolerate moderate frost and snow, making a large shrub or small tree 4–8 m tall."

The fruit it produces is very bitter and probably not for eating alone, but it is great for making marmalades. I will definitely be on the lookout to add this to my back yard!  Here is what it looks like with its fruit: 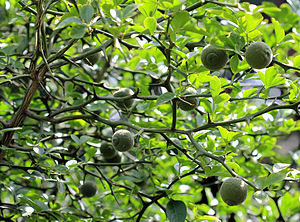