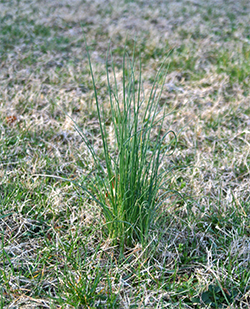 Wild onions (Allium species) are some of the first plants to pop up in middle Tennessee.  This year their bright green tufts began poking their heads up at the end of January.  Tennessee has wildly fluctuating weather.  One winter day can be near 70 degrees while the next day is 30 degrees with an ice storm.  Some years you have more near 70 degree weather than others and the poor confused plants start blooming early.  I actually used this to my advantage when I brought my soon to be husband home to visit my family at Christmas one year and it was barely sweater weather.  It convinced him to move here from Florida!

One of the few wild plants with which my family has a history is the wild onion.  My grandparents were from Denmark arriving in the United States in the 1950's with their growing family.  My grandfather was an engineer working for the government and my grandmother had worked as a midwife and nursing assistant before leaving Denmark.  By the 1960's they had four children and they divorced.  My grandfather traveled to foreign countries on long assignments for his job so he was not around.  My grandmother, who probably did not have the right credentials to continue her career in the United States nor a strong enough grasp of English, was only able to work low paying jobs. So here she was in the United States with no family support system, four children to raise and limited financial resources.  To put it bluntly, they were poor and struggling.  So poor that my mother would tell me stories about drinking Pepsi and picking and eating the wild onions on crackers for food. Not exactly complete nutrition but if you are starving, you take what you can get.  So the wild onion is a personal favorite of mine.

The main rules for onion hunting are if it smells and looks like an onion, it is an onion, and do not harvest along a roadside, industrial area, or yards that have been sprayed with pesticides.  There is a resemblance to a mildly toxic plant called Crow's Poison (Northoscordum bivalve) but it does not have an onion smell when crushed.  You would have to eat a pound of Crow's Poison to get a stomach ache.  Another look-alike is Death Camas (Toxicoscordion venenosum) and is poisonous but does not smell like onion.  It is usually found out West not in the South. Also, all onions are toxic to dogs and cats so do not feed it to them.  Onion hunters tend to find a favorite patch, often not revealing the location, and return to it to gather their onions year after year.

There are two common types of onions that you will most likely find, wild garlic (Allium vineale) and wild onion (Allium canadense).  Often you will not be able to tell them apart.  They both have long narrow leaves arising from basal bulbs. However, wild garlic has hollow and round leaves while wild onion's leaves are flat and solid.  The more common of the two is wild garlic.  All wild onions and wild garlic are edible.  They will never grow bulbs the size of store-bought onions as it is not in their genetics.  Their bulbs will be more like pearl onions.  The leaves are skinnier than the green onions that are sold in the store, and have a stronger oniony taste. They actually look more like chives. Cooking the onions mellows the flavor out.  You can replace wild onions in any recipes that call for green onions or chives.

It is common in some parts of the south and west for churches to have wild onion lunches for fund raising in the springtime.  They are typically served sauteed with scrambled eggs.  As far as nutrition goes, wild garlic and onions contain vitamin C, A and potassium.  Native Americans ate wild onions as a cure for colds.  They also rubbed the plant on their bodies to protect them from insects.  In modern times, onions have been reported to lower blood pressure, help to facilitate detoxification, act as powerful antioxidants, stimulate immune responses and reduce inflammation.

Wild onions/garlic can also be dehydrated and used for later purposes.  However, if doing it indoors, it will make your house smell like onions for days.

Here are some recipes to try:

Eggs and Bacon with Wild Onion

In a medium bowl, whisk together the eggs and milk and season with salt and pepper.  Set aside.

In a hot pan, fry the bacon until nearly crisp.  Add onions and fry until bacon is crisp.  Add the egg mixture and cook, stirring until set, about 4 minutes.  Cook until desired egg texture is achieved. Sprinkle with cheddar cheese before serving.

Add half and half, milk, bouillon, pepper, and oysters.  Cook until heated through, gently stirring occasionally.


Notes: While the content of this blog has been tried/tested and the research diligently presented, I am not responsible for your use of it. Always try a little of the food first to test for allergies. Please do your own research. Discuss with your doctor before you use any herbal medications.
Posted by Dr. Mom at 6:31 PM