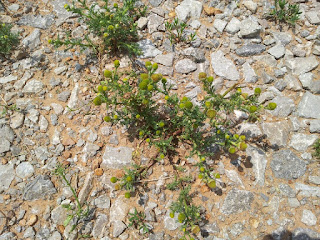 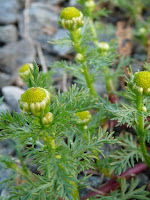 This plant is awesome!  Several weeks ago I was forcing taking my kids on a nature walk, when toward the end of our walk I spied this unusual plant growing in a gravely area.  I reached down and plucked it to take home and check out because I kind of remembered seeing it in one of my books.  I got a "Thank goodness she's not telling us about that one!" from the kid chorus.  Not yet, anyway...

By the time I got it to the car I had remembered that it could be pineapple weed and that if you crush the flowers it will smell like pineapple.  Sure enough, when I did it gave off a delectable aroma!  I got excited (I am such a nerd).

As it turns out, this is pineapple weed, Matricaria discoidea, a close cousin of chamomile with many of the same reported properties.  It is an annual plant native to North America and Northeast Asia.  It blooms from March until September.  It loves to grow in disturbed areas, especially those with poor, compacted soil.  Some avid gardeners report that it dies when transplanted to richer environments.  It resembles chamomile with the exception that the flowers have no petals, just the center head. It has small, pointed fern-like leaves.

It has traditionally been used medicinally as relief for gastrointestinal upset, fevers, infected sores, and postpartum anemia.  It's been reported to have a sedative, calming effect.  In folk medicine, it is sometimes utilized as a home remedy in the treatment of intestinal worms.  Also, the plant, when crushed and rubbed on skin, provides an effective, yet temporary and pleasant smelling insect repellent.

You can eat the plant raw or cooked.  It is frequently used as a tea, some even stating that it is better than its cousin the commonly used chamomile.  A word of caution, some people are allergic to this plant, so try carefully.  There are few plants that can be confused with this plant and none that smell like pineapple.

I returned to my new favorite pineapple weed picking spot and gathered a bouquet on which to experiment.  My car smelled incredible on the way home.  Some say this plant smells like pineapple (I agree), others say it has a more green apple smell.  Either way, it is truly amazing.  Just one plant is pleasant but a whole bunch is fantastic.

I made Pineapple Weed Cheesecake which even pleased my kids.  Here is the recipe if you would like to try!

Place the sugar and water in a saucepan and bring to a boil, stirring to dissolve the sugar. Remove from the heat and add the pineapple weed. Cover the pan and leave to infuse for 30 minutes. 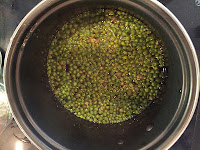 Meanwhile, in a large mixing bowl, whip the cream cheese until smooth. 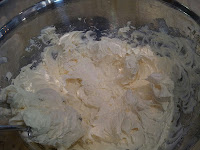 Strain pineapple weed mixture through muslin, coffee filter or a fine sieve. Return strained mixture to the saucepan over low heat.  Add the gelatin and mix until dissolved, about 5 minutes.

Then in a separate small bowl, whip the cream, sugar, and vanilla just until it is stiff enough that pulling the beater out leaves a hole that does not fill in. 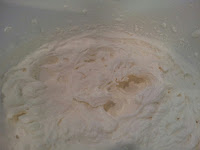 Place 2 tablespoons of ground nuts in the bottom of your individual serving dishes (preferably clear), and tamp it down with your fingertips. 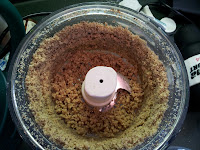 Carefully spoon or poor in the cream cheese mixture, then drop two dollops of the whipped cream on the top. Garnish with one or two pineapple weed flower head.

Refrigerate until firm, about four hours.

This makes six half glasses or more if you use smaller dishes. 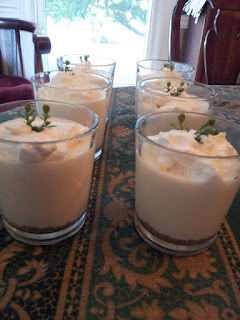 Other recipes that are great to try:

Also check out Pineapple Weed Sugar by Wildness.  This looks amazing.
Posted by Dr. Mom at 8:14 AM