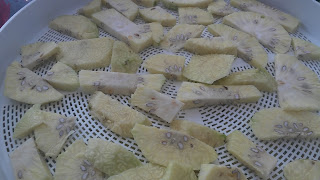 Lately I have seen numerous references to the use of Hedge Apples as an effective treatment for cancer. I began to wonder, what would you do if someone you loved had cancer and something catastrophic occurred that caused the medical field/ economy to collapse? Or if traditional treatments did not work? So as an experiment, I trudged out to the trees in December to see the state of the hedge apples. While the exterior was beginning to brown in spots, the flesh was still firm and fragrant. I collected five to try dehydrating. After which I plan to grind into powder and add to my growing herbal collection. In the past, I have tried the seeds of the hedge apples (pretty good) so I left them in. Hedge apple flesh is not very tasty though not poisonous. However, if you have a latex allergy you may want to avoid them. They have gained a bad reputation because they tend to cause cattle or horses to choke. Squirrels really like them.

Some people freeze them whole and grate for a tablespoon twice per day while others dehydrate and turn into a powder which can be put into capsules. I am not recommending this as a treatment since I do not have personal information on it and I am not a medical doctor, but I do want to have it on hand if needed. I have found that I will forage something thinking it will never be needed or used only to realize its value and use later.
Posted by Dr. Mom at 5:14 PM